Twenty-one bands totaling 2,250 students were in Fredericksburg on Saturday to compete in the annual Hill Country Marching Festival.

Fredericksburg High School band director Jason Younts estimated that another 1,800 people were in the stands to watch.

Held at the Fredericksburg High School Stadium, the event included bands from 1A through 5A schools, including Harper High School.

Results from the festival are as follows:

The Fredericksburg High School Pride of the Texas Hill Country Marching Band did not compete in the show Saturday, but will be heading out to contests in the coming weeks.

FHS will compete at the Rough Rider Marching Contest in San Antonio at 12:30 p.m. and the Judson Rocket Review in Converse at 6 p.m. on Saturday, Oct. 5.

They will perform the following Saturday, Oct. 12, at USBands Yamaha Cup at Rutledge Stadium-Judson ISD. Performances begin at 12:30 p.m.

This is not an advancement year for the FHS Band.

Title of the show this year is “Bound(less),” which includes music by Prokofiev, Lowes, The Fray, Beethoven, Manny Maldonado and Dustin Schulze.

“The show is a narrative about the only restrictions that we have are what we place upon ourselves,” Younts said.

The show begins with a saxophone duet performed by Parker Feuge and Zavior Vaquera. Additionally, head drum major Mia Stenberg performs a clarinet solo during the ballad and Sergio Martinez performs a trombone solo during the Beethoven No. 3 portion of the show.

Head drum major is Stenberg and assistants are Ximena Saldana and Shirley Barrera.

The band is under the director Jason Younts, who is assisted Jeremiah Ward, Dustin Schulze, Chris Sterling and Ryan Williams.

Next up for Harper will be the Comal Classic Marching Contest in New Braunfels on Saturday, Oct. 12 at the Canyon High School Stadium.

Harper is set to perform at 9 a.m.

On Saturday, Oct. 19, Harper will compete in the UIL Region 29 Marching Contest at Dub Ferris Stadium in San Antonio at 12:50 p.m.

As this is a “non-advancing year” for class 2A, the region contest will mark the final contest performance for Harper this marching season.

The band is under the direction of Stephen Krupicka and Sarah Rose.  Color guard instructors are Debbie Sander and Brittney Schlueter.

This year’s marching show is entitled, “A Night at the Movies” featuring some of the movie themes  of legendary film composer John Williams, including, “Jurassic Park,” “The Lost World,” “Raider’s March” from Indiana Jones, “Jaws,” “Superman,” “E.T.,” and “Star  Wars.”

By:
Standard-Radio Post staff
Subscribe and see the e-Edition of the Fredericksburg Standard for the complete story. 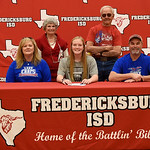 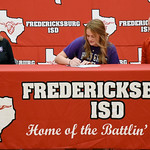